Is Auto Finance an ARM Sector on the Rise?

Auto loans have long been an interesting market for the accounts receivable management industry. While total outstanding balances have always been quite high, historically in line with credit cards for example, the secured nature of the loans limit the work collection agencies could do for lenders.

But recent data show that auto loans are growing at a rate that mirrors student loans. And a lot of that growth is in the subprime market.

Auto loans represent the second-largest market of secured loans in the U.S. Underlying each loan is a physical asset that can be taken – repossessed – if the borrower defaults. The creditor can then sell the car and typically cover the outstanding balance due.

It doesn’t always work that way, however.  If a repossessed car fetches less than what is still owed, there is a deficiency balance remaining. This is typically what ARM firms have been working with regard to auto loans.

And it has been a meager market. In its most recent economic impact report, ACA International and Ernst & Young found that “auto loans” didn’t even register as a significant sector of the ARM industry. Only 2.8 percent of money recovered by collection agencies fell into an “Other financial services” category which included auto loans.

Lenders are becoming increasingly willing to do business with consumers with lower credit scores, subprime customers. The Federal Reserve Bank of New York (FRBNY) recently released a study of subprime auto lending with the following takeaway:

Since the trough in Q4 2009, balances have risen across the board, but the growth has been most pronounced among the riskier groups, which also experienced the most severe contraction during the credit crunch of 2007-09. The dollar value of originations to people with credit scores below 660 has roughly doubled since 2009, while originations for the other credit score groups increased by only about half.

Delinquencies on auto loans remain historically low, with FRBNY reporting that the 90+ day late payment rate on auto loans in Q2 2014 was 3.3 percent, roughly the same rate as loans backed by real estate and far below the rates seen in credit cards (7.8 percent) and student loans (10.9 percent).

But the total pot of auto loans is growing. It’s now the second-largest non-mortgage consumer credit class in America. 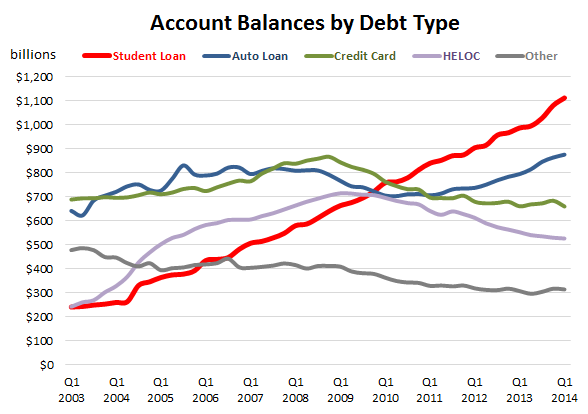 There is one other development that might drive the ARM industry’s participation rate in the auto finance sector: car repossessions are declining.

Experian reported that in the second quarter of last year, fewer vehicles were repossessed for non-payment of loans, 0.36 percent, than in any quarter since Experian began keeping such records in 2006. At the same time, the average charge-off amounts for defaulted auto loans were up by $450, from $6,768 in Q2 2012 to $7,218 in Q2 2013.

If the traditional method of recovering on bad loans is declining, surely creditors are exploring other avenues to make good on these loans.

It remains to be seen what utility traditional third party collection agencies can be in the auto finance market. But it is a sector that is growing and should be explored by firms looking for other markets.