Are You Measuring the Health of Your Team's Heart? You Should Be.

Our heart is the most important part of our body. It pumps blood throughout our system to supply energy for everything that we do. If a team were a body, the supervisor would be the heart. He or she would be responsible for pumping vital motivation, feedback, and inspiration throughout the team.

One of a supervisor’s secret weapons for fighting employee disengagement is an employee feedback survey. Not just the run of the mill, do-you-like-your-paycheck variety. Something better. Something deeper. Something that allows employees to measure their supervisor’s effectiveness. This “upward feedback” can be a catalyst that helps companies improve employee engagement as it can help to pinpoint areas of strength and weakness within the heart.

Employee feedback surveys aren’t anything new. Gallup, Inc.’s Q12, which is used by many world-class companies, has been around since the late 1990s, and general satisfaction surveys certainly pre-date that.

My first experience with “upward feedback” came during my first job as a supervisor, and there wasn’t much to it at the time. I created and distributed a generic 12-question response form for staff to complete, and to provide them a fearless way to be brutally honest, I asked them to submit the completed forms (anonymously if desired) to my manager before I had the opportunity to view them.

My manager then provided me average scores for each question, and with feedback in hand, I identified the weakest two areas and developed action plans for both. Then, I got busy strengthening my heart.

Asking employees to rate my performance did three things:

In the years since, I’ve watched my meager 12-question form blossom into a 21-question survey that measures seven areas of a supervisor’s performance. Today, I’m able to use that form and the upward feedback process to help other supervisors get a feel for how healthy their heart is – in the eyes of the team members.

The charts below graphically represent the feedback received for one supervisor that I had the pleasure of working with over a two-year period to implement an upward feedback initiative.

The initial survey was conducted in June 2009, and included responses from 23 people; the follow-up survey, conducted in July 2010, included responses from 19 people. The survey used 21 questions to measure seven areas of the supervisor’s performance and the respondents were asked to assign a score to each question ranging from 1 (low) to 5 (high).

Here are the seven areas measured:

Using the feedback from the first survey (Fig. 1), the supervisor identified two areas of opportunity: recognizing staff and getting to know the team members as individuals, not just as inputs in the system. She also recognized that her two strengths were job knowledge and developing her staff. 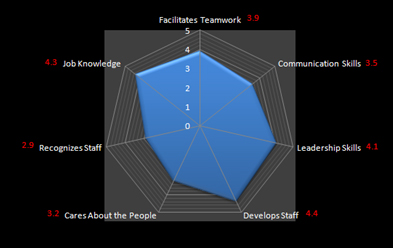 Using this feedback to her advantage, the supervisor developed an employee recognition and awards program and created a strategy for getting to know each of her team members better. The fruits of her labor are expressed in the follow-up feedback she received a year later (Fig. 2). 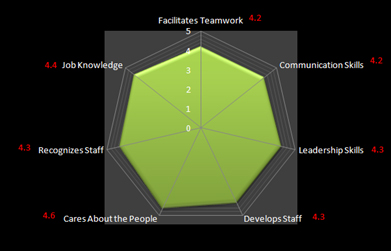 NOT A PERFECT SCIENCE

These seemingly subtle differences can have a major impact on scores. For example, what if the seven who left the company were axe grinders (employees who purposely score every question low as a way of getting even with the supervisor for a perceived injustice)? Or, what if the three new recruits were speed racers (employees who give high scores in every category because they are merely rushing through the process)? Clearly, each example would have a different impact on the supervisor’s average scores.

You should keep in mind that these feedback surveys are not a perfect science and that some data pollution can occur. However, that doesn’t mean that the feedback, or the feedback process, isn’t valuable.

A few years after I developed my first upward feedback questionnaire, my career took a turn and I moved on to a new company, taking my feedback form and approach with me. In the first meeting that I held with my new team, I introduced the upward feedback concept. I let them know that they would each have an opportunity to assess my performance at my 90-day mark. “What? I get to review you,” one collector said in a puzzled manner, “I’ve never heard of that before!”

But three months later forms were distributed and results were compiled. Upon reviewing staff feedback, I was able to identify a couple of weak points in the heart. As I had in the past, I put together an action plan and got busy strength training. A few months later one of the employees came up to me and said something I’ll never forget: “I appreciate you listening to me.”

Are you willing to listen?  The health of your heart depends on it.

Next Article: How to Groom Employees for the Next ...