Rays of Light Shining on the Credit Card Sector 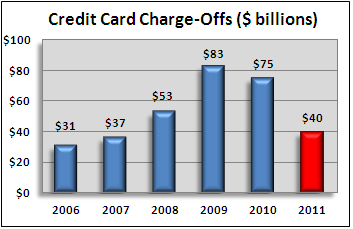 It is hard to fathom that there may be reasons to feel optimistic about the credit card sector, particularly given that charge-off placement volumes are down nearly 50 percent in 2011 vs 2010 (see chart at right), and the delinquency/charge-off rates seem to be in a permanent free fall. But there are distinct market trends unfolding that give validity to the notion that the credit card sector is finally bottoming out, and is poised for growth in the future:

While it remains unclear exactly when delinquency and charge-off volumes will stabilize, current market trends seem to indicate that this process may have already begun. We can only hope that banks will continue to lend to consumers, who will continue to spend and eventually enable the U.S. economy to get back on track. I believe we are seeing the early signs of this progress and look forward to watching it unfold throughout the rest of this year.