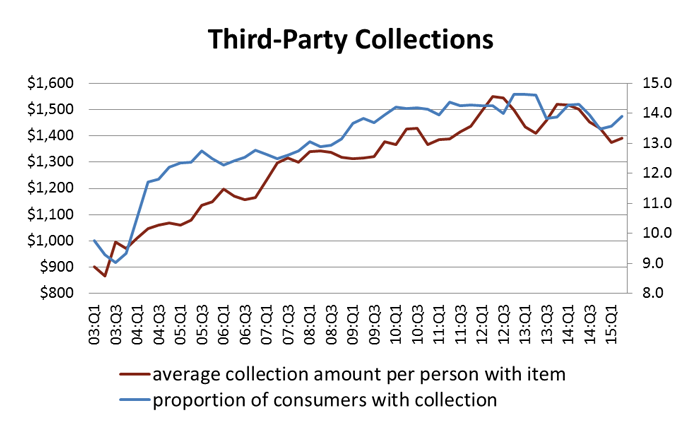 Consumer behavior is among one of the biggest changes, as illustrated by the graph above. The Federal Reserve Bank of New York’s (FRBNY) microeconomic release measures the percentage of accounts placed with third-party collection agencies and the face value of those accounts. Both lines grew consistently from 2003 until 2012, when consumers began a strong trend of paying down debt.

As the economy improves, banks have relaxed their lending standards, unemployment rates have leveled off, and consumers have started borrowing more, all trends that bode well for ARM companies. 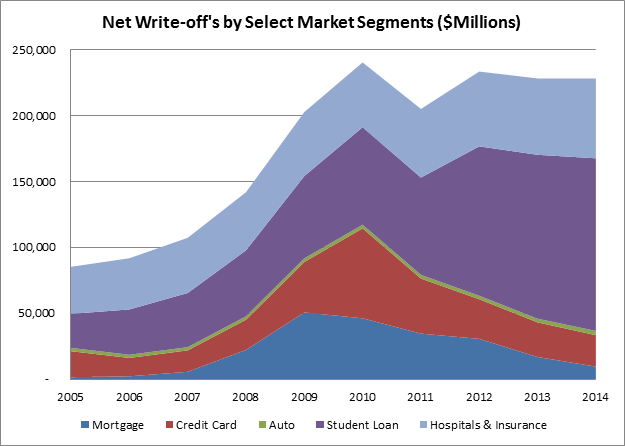 Another significant change, as the illustration above depicts, is the net write-off activity within the largest ARM market segments. Healthcare and student loans are growing at exponential rates; the total volume of these combined industries has expanded from $85 billion in 2005 to $228 billion in 2014.

Also worth noting: the auto loan industry has been front-page news these last few years, and fear-mongering from the CFPB hasn’t helped matters. Despite growth within charge-offs for this market, auto loans only account for a very small piece of the total net charge-off pie. While this is a growing market segment, it would have to increase nearly seven times to equal the credit card industry, and 20 times to be anywhere near the healthcare industry.

On the M&A front, large transactions led the way last year, including Alorica’s acquisition of West and Platinum Equity’s acquisition of NCO’s third-party collection business. On the debt-buying side, PRAA and Encore made moves outside the U.S. However, larger transactions have slowed down and will be replaced with consolidation among small and mid-sized ARM companies as owners are challenged to operate profitably as stand-alone businesses. Larger entities are better suited to absorb increased costs in today’s world of collections.

Arguably the most significant change within the ARM industry is the barrier-to-entry that has emerged in recent years. It used to be if you had a rotary telephone and a mouth, you could start a collection agency. Those days are long behind us. The cost of operating in this regulatory environment and credit grantors’ higher demands make for fewer successful startups. This is good news for established companies.