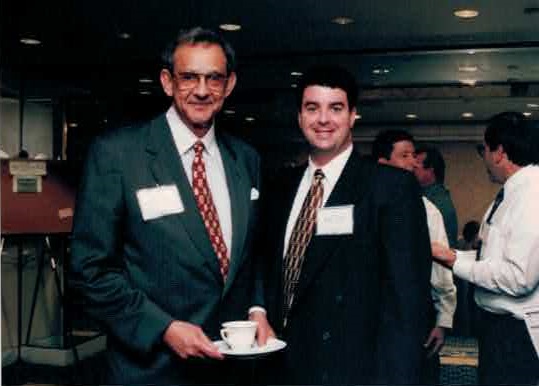 Marvin Kaulkin passed away earlier this week. I was fortunate to have him as a big part of my life for more than a quarter century.

During that time, I got to know Marvin in many ways. I value the countless experiences we shared and the leadership qualities he bestowed upon me.

People want to do business with people they like and respect.

Marvin started M. Kaulkin & Associates in the late 1980s to help owners sell their businesses. Prior to that, he ran a family business for 30 years before becoming a certified financial planner. He had an unusual combination of experiences that made him extremely well-qualified to advise owners: he himself was an owner and operator of a family business for many years, he understood how to manage investments, and he realized that significant personal wealth could be realized through the sale of a closely-held business.

Marvin was a towering man at 6’5″ and he always attracted attention when he walked into the room. He was charismatic and had a magnetic personality that others wanted to be around. If he was paid a dollar every time he joked about Pittsburgh, he would have been a very rich man. Owners valued Marvin’s perspective and he was always willing to share it.

Marvin and I met in late 1990 when I was struggling to find a job. As a recent graduate of the University of Maryland, College Park, I envisioned myself working at a big Wall Street firm in New York City. I quickly realized that Wall Street wasn’t hiring undergrads from a state school with no experience, so I broadened my search to D.C. and Chicago and every city in the northeastern part of the country. I must have sent out 400 resumes and received nearly that many rejection letters.

My girlfriend at the time knew I was frustrated, so she introduced me to a dear friend of her father’s, Marvin Kaulkin. She wasn’t sure what he was doing professionally, but he lived close to me and she thought he could be a mentor.

Marvin willingly met with me and told me he wasn’t hiring. I told him that I would take the job. He said he wasn’t going to pay me anything, and I said that was more than enough for me. He said that I would have to pay for my own parking, and I said that was fine. He knew I wasn’t going away until he hired me, so he took me under his wing. We bonded that day, and we remained close until he left the business a couple of years ago. I would say it was a pretty good ride for the both of us.

In 1993, I was asked to speak in Arizona in front of a group of bill collectors. Even though I feared public speaking, I accepted the opportunity, and it was one of the worst days of my professional career. I sweated profusely, read my notes instead of looking at the audience, and botched every aspect of this speaking engagement.

When I got back to the office, I told Marvin about my failure. He simply said that I was at a crossroads in business and needed to make a decision: either I could crawl into a hole and never speak publicly again, or I could get right back out there and find another opportunity.

I told him that I embarrassed myself and poorly represented his firm. Instead of harping on the negative, Marvin focused on the big picture and encouraged me to get back on the horse. So, I accepted another speaking engagement and worked diligently on improving my public speaking.

Be creative and it will pay off.

One day in 1998, Marvin returned from lunch, walked into my office, and proclaimed that we were going to be “infomediaries.” I asked him if that was a real word, and to this day I think he made it up.

He told me that he started receiving news from a media outlet by email and thought we should start doing the same thing for the debt collection industry. At the time, I don’t even think I had my own email address. Most people were still using fax machines and phone calls to communicate, but he thought this was the future and we should be a part of it.

Marvin was an entrepreneur, so when I asked him how we were going to pull this off, he wanted no part of answering it. We didn’t have anyone’s email addresses and we didn’t have any news, but he was determined to provide news to owners via email every day.

That was the start of the first news portal for the collection industry.

Those who knew Marvin professionally knew that he wasn’t a touchy-feely kind of person. He did not acknowledge birthdays. He never had a problem telling someone how he felt, and I was the recipient of many stern lectures.

I remember when we were just getting CollectionIndustry.com off the ground, and we had a meeting with the editor of the largest industry publication at the time. The meeting did not go as planned, and Marvin was quick to point out what he thought I did wrong. I felt he was right, so I called the editor to apologize. That was Marvin’s style; he told you how he felt, but he always did so behind closed doors, one-on-one, and in a very convincing manner.

Rest in peace, Marvin. You were one of a kind, and you will be missed.