Medicare continues to slice into margins for the nation’s hospitals and physicians, while at the same time shifting more costs onto beneficiaries.

More importantly, the federal government’s policies regarding inpatient versus outpatient Medicare reimbursement, combined with the aggressive pursuit of overpayments by its auditors (notably Recovery Auditors or RACs), have shifted costs from Medicare Part A to Medicare Part B, with its lower reimbursements to providers and required co-pays of beneficiaries.

In 2012, Medicare paid $2.5 billion in observation status claims. Extrapolating from that figure, that means beneficiaries were charged more than $600 million in copayments. According to the MedPac report, the average claim was for $1,400, and the average co-pay was $360. Conservatively, in 2012 more than a million of the nation’s seniors were admitted to hospitals under observation status.

Overall MedPAC found that inpatient claims declined between 2011 and 2012, even though the number of beneficiaries increased. “From 2011 to 2012, the volume of inpatient  services declined approximately 4 percent to 6 percent across all Medicare age groups,” the report found. 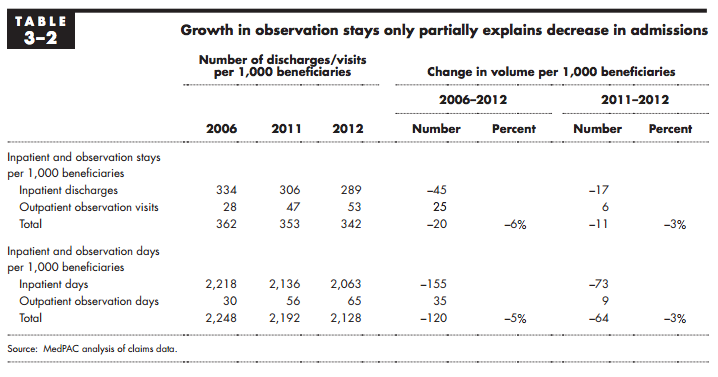 At the same time Medicare received a large increase in “observation status” claims. While much of that increase is attributable to Medicare reimbursement policies and audit scrutiny, it is not the only explanation. Writes MedPAC:

Over the last several years, outpatient observation claims have risen rapidly, but these stays alone do not account for the decline in inpatient discharges. From 2006 to 2012, the number of outpatient observation claims per 1,000 Part B beneficiaries increased from approximately 28 to 53 visits. Inpatient discharges declined by 45 discharges per 1,000 beneficiaries (from 334 to 289). The net result is that the combined number of inpatient and observation stays declined by 20 stays from 2006 to 2012 (a 6 percent decline) and by 11 stays from 2011 to 2012 (a 3 percent decline). When we used days spent in the hospital as the unit of analysis, we similarly found a 3 percent reduction in combined observation and inpatient days, indicating that the growth in observation days does not fully explain the decline in inpatient days and occupancy.

Next Article: CFPB Speech to Chamber of Commerce Hints ...