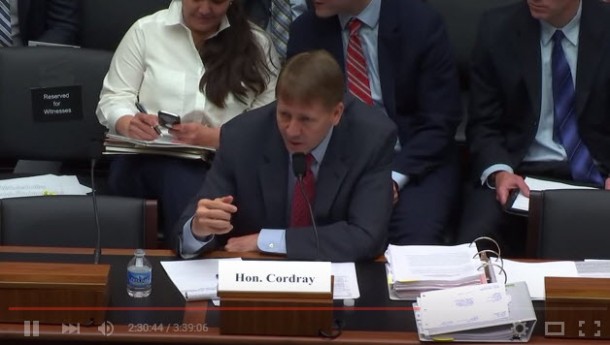 Throughout the long (nearly 4-hour) and often contentious hearing, Committee Members pushed Cordray on his agency’s rulemaking authority, the efficacy of statistical methods behind enforcement, the agency’s lack of transparency and the merit behind newly proposed Bureau rules involving payday lending and auto financing.

Cordray was surely not expecting a friendly audience and – with the exception of several Democrats who spent the whole of their time praising the Bureau’s work – a visibly agitated Cordray spent the bulk of his time defending Bureau actions.

Much of the discussion centered on Bureau plans to create new, Federal rules for payday lending. Several Committee members, including Randy Neugebauer (R-Tex) and Committee Chairman Jeb Hensarling (R-Tex) challenged Cordray on the Bureau’s plans to regulate small dollar, short term loans. Neugebauer specifically criticized the Bureau for not identifying alternative products that could fill that credit need.  Rep. Dennis Ross (R-Fla) noted that proposed CFPB regulation would eliminate many payday lenders and that the ratio of complaints to transactions is not nearly big enough to justify Federal regulatory action.

In response, Cordray suggested that state laws were not protecting consumers and that Bureau data will drive regulatory efforts.

“Should we just leave this alone? Are the states doing fine [with payday lending]? We did research which showed large numbers of consumers who end up trapped in debt,” he said. “They’re getting 8 to 12 loans in a cycle. Some stories are quite gross. I can’t in good conscience leave that alone. We can make reasonable interventions so people are not victims of predatory lending.”

The rule extends CFPB supervision to any nonbank auto finance company that makes, acquires, or refinances 10,000 or more loans or leases in a year.

Several committee members also questioned Cordray over the use of propriety data in rulemaking – i.e., data not accessible to the public – and the fact that the Bureau chooses to propagate new rules and standards through enforcement actions, which are not subject to notice or comment.

Cordray did hint at future targets for CFPB scrutiny, including student loan servicing.

“There are significant concerns with student loan services,” Cordray said. “We feel like there are various practices in the industry that are sub-par. We’re trying to work to clean that up, to bring it up to standard so people who already owe a fair amount are not also burdened with the misappropriation of payments and the various ways the industry is not servicing people well.”

Neither Cordray nor committee members mentioned debt collection tactics or the debt collection industry. Auto finance and payday loans may be more “top of mind” at the moment. We also know that the auto dealer lobby is not short on cash; a luxury that debt collection associations do not have. Nonetheless, we took note of the lack of passionate support for the process that serves to protect the final link in the consumer finance chain, while it was there for affordable auto loans and small dollar lending options.

Also of note was Cordray’s multiple mentions of the input he has received over the past year from the “faith community” (he said, “They have been Protestant, they have been Catholic… Muslim, Jewish, Fundamentalists, Progressive”) and how much impact those voices have had on the Bureau’s thinking with respect to payday loans. One of the later comments from a Member expressed concern over how much sway these groups seem to have had over him.