Update on M&A Activity in the ARM Industry

The global ARM industry merger and acquisition (M&A) market experienced a pretty wild roller coaster ride over the past year due to changing market and economic trends, which have impacted buyer interest and market valuations.

ARM deal activity declined in 2012 due predominantly to a significant drop in U.S. transaction volumes. While buyers were highly motivated to pursue deals, particularly in the healthcare, government and student loan markets, they were also increasingly concerned about the regulatory environment both at the state and federal level, and how it would impact ARM companies.

The presidential election didn’t help matters, adding to the uncertainty about which way the regulatory winds would blow post-election. Certain sellers also had a hard time forecasting their company’s future performance as select credit issuers temporarily held up placements due to technology conversions, audits by federal agencies such as the CFPB, and involvement in M&A activity themselves. Still buyers were actively looking at deals and motivated to get them done with the right companies, and are continuing to seek out the right opportunities.

Here is a look at the level of M&A in 2012 compared to prior years. 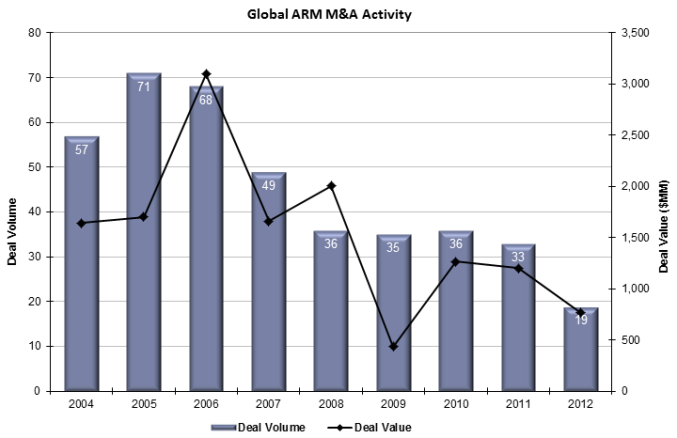 From an M&A perspective, the U.S. market is in the midst of a cyclical change driven by the trends noted above. Like all previous recessions and cycles, the ARM industry will survive this one and eventually enter another era of growth but it will take time and certain changes will have to occur. One change that we already see unfolding is a reduction in the number of smaller ARM companies. Historically, the ARM industry has been known as a highly fragmented market, dominated by “mom and pop” shops.

Today, while the majority of ARM companies generate less than $5 million per year in revenues, this number is declining as it has become far more challenging to sustain a collections business due to the increased resources and costs necessary to comply with regulatory and client compliance requirements. The legislative and regulatory environment has created a barrier to entry in the U.S. ARM industry. While this is driving the current consolidation trend, it will eventually enable the ARM industry to rebound and become a growth oriented market again as the survivors thrive in the new environment.

Internationally, buyers (including U.S. ARM companies) were actively pursuing deals due to heightened business activity, particularly in Europe, South America and select Asian markets (India, Philippines, etc.). Debt buyers in Europe garnered a lot of attention from financial and strategic buyers, but not many deals were consummated as sellers and buyers could not always agree on value. This may change in 2013 as certain large players were successful in re-financing their businesses in 2012 and lenders are eager to do more deals.

Brazil and Mexico have also been gaining attention from buyers due to growth opportunities in each of these markets. As India, Philippines and other emerging markets continue to form a stable credit economy and thriving middle class, U.S. based and other international ARM companies will also seek to establish a foothold in or more of these regions, most likely via strategic acquisitions and partnerships with domestic companies.

Here is a summary of the deal valuation multiples and structure realized in transactions in 2012. As always, there were outliers, but these ranges cover the majority of deals consummated based on the designated size categories.

We did see an increase in the use of structure to bridge differences in buyer and seller valuation perspectives, particularly in the U.S. All cash deals were consummated, but in some cases this caused a downward pressure on market value.

We are anticipating a more robust ARM M&A market in 2013 due to the following factors:

While there are some challenging trends unfolding in the U.S., we remain bullish about the M&A market for 2013. Deals are happening and will continue to occur so long as both sellers and buyers are willing to negotiate in good faith and work together to structure deals that are mutually beneficial.

If you are interested in confidentially discussing your business interests, please contact Mark Russell at 240.499.3804 or by email.

Next Article: Nigel Morris, co-founder of Capital One, Joins ...