A couple of weeks ago, I caught up with a colleague of mine who specializes in purchasing and servicing later stage credit card receivables (tertiary and beyond). I asked him how business was and instinctively thought he would tell me that business was good even though prices were a little higher than he would like to pay (isn’t that always the case?). His answer was completely the opposite – business volumes were starting to decline and he was having a really hard time finding portfolios to acquire. 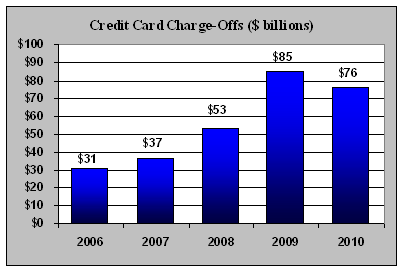 What??? With over $200 billion of face value debt charged off in the credit card market alone between 2008 and 2010, how could business volumes be declining at the later stages?

So, I decided to do a little digging. I ended up contacting about 30 industry professionals who work for collection agencies, debt buyers, debt collection law firms, and yes, even credit card issuers, and came up with about 15 different theories but one general answer: all of those post-financial crisis card charge-offs have worked their way through the ARM system.

I still have a hard time rationalizing how so much debt could be worked through the system in such a short period of time, but most of the folks I have talked to believe that credit issuers reduced the amount of time that accounts were outsourced at the earlier stages of delinquency (3-4 months at the prime, mid-prime and second stages vs. historical averages of 4-6 months). At the same time, creditors were pursuing a more legal collections channel-intensive strategy earlier in the delinquency cycle – not necessarily pursuing judgments immediately, but outsourcing more accounts under a pre-legal strategy. While debt buying activity declined in 2009 due to falling portfolio prices, acquisitions increased in 2010 as prices rose. So, a greater percentage of paper ended up with law firms or debt buyers in a shorter timeframe.

Later stage collection agencies and debt buyers have certainly received a growing amount of business over the past couple of years, but that market cycle seems to have ended, or is in the process of ending, for them as well.

Although volume declines are definitely the new normal for now, there is recent encouraging news. The Federal Reserve Bank of New York reported this week that credit card account limits grew $60 billion in the second quarter of 2011, and that 10 million new card accounts were opened over that time. Even though delinquencies continue to decline, banks are once again issuing new credit on cards, a sign that the market may turn back around in 12-18 months.

There is obviously more to this story than what I have been able to share with you in a blog. Feel free to add your own comments, I would love to read them and enjoy the rest of your summer!

Next Article: Invest in SST