Alternative Lending: The New Frontier for the ARM Industry?

There have been many articles written and presentations made at conferences on the future of the ARM industry. If you are in this industry, you would have to be living under a rock not to know that the long –time industry bell cow, Credit Card collections, is still in the doldrums.  We have also seen and heard multiple pronouncements that Healthcare Revenue Cycle Management and traditional third party collection of Healthcare accounts are growth opportunities.  Likewise we have all heard that Student Loan and Government receivables are growing and potentially lucrative areas for ARM firms, but each comes with high barriers to entry.

So, what else is there?

I have two words: Alternative Lending.

Tech Crunch reported that Alternative Lending is a Trillion Dollar industry. That is not a typo.  That’s trillion. That is a big number.

Alternative Lending is a broad description of a variety of products.  You may have also heard the terms, Online Lenders, Alternative Financing, Payday Lending, Title Loans, Peer to Peer Lending (P2P) and Marketplace Lending to describe these businesses. I believe these are all sub-categories of the broader Alternative Lending group. These sub-categories are often blurred.  For instance, it may be difficult to distinguish between an “on-line lender” and a “marketplace lender.”

There has been a lot of news in the past several years regarding payday lenders and title loans. Much of the news regarding these businesses has not been positive. But, as a result, most of the ARM industry is already well aware of those businesses. But, there is not yet a great awareness of the Alternative Lending sub-categories marketplace lending or peer to peer lenders.

This article will focus on the generic category of marketplace lenders, which includes P2P lenders.

This industry, which initially seemed to focus only on millennials, is growing at an exponential rate. Morgan Stanley reports that from 2010 -2014 Marketplace Lending had a Compound Annual Growth Rate (CAGR) of 123%; and an Expected CAGR of 51% from 2015-2020. At these growth rates, it is would seem that it is not just limited to millennials any longer. 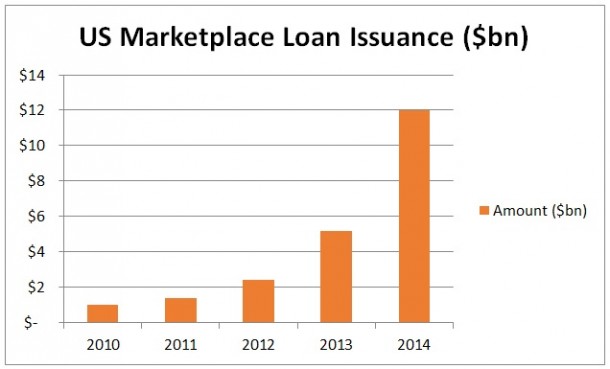 Similarly, a headline on the website for an upcoming Marketplace industry conference states: “Marketplace lenders will originate $1 trillion in loans in 2025.” (Marketplace Lending and Investment Conference)

Just a few of the companies lending to consumers in this space include Lending Club, Prosper, Avant, Sofi, Upstart, Common Bond, Credible, and DriverUp.  But there are many other companies and new entrants to the market on a regular basis. Each has a particular marketing approach and target audience.

There is also a healthy market for marketplace lenders for business loans.  Companies in that sector include On Deck, Kabbage, CANCapital, FundingCircle, Biz2credit, and many others.

The Private Equity and Venture Capital world are also both pouring money into the space. These entities are investing not only in the lending companies and loans, but also the software companies that support the market. Such software companies include Orchard and Cloud Lending Solutions.

Many of these companies are Silicon Valley based. The business model calls for a solid, but minimal infrastructure and, as opposed to traditional banks, minimal “brick and mortar.”

“Focus on your core competencies. If it is not a core competency, outsource it.” That is a business mantra that would seem to fit the Alternative Lending industry.

If I am right, there should be a large opportunity NOW for the ARM industry IF your company has the ability to provide first party outsourcing services in care and collections.  There will be additional opportunity for traditional third party collection efforts later as loans that are made today begin to default.  There may also be a large future opportunity for debt buyers as the volume of delinquent loans grows.