What Has Driven the Increase in Complaints to the CFPB and What Should They Do About it?

It’s convenient for consumer groups and legislators to point to the complaint statistics published by the Consumer Financial Protection Bureau to justify the need for increased regulation. As a consumer myself, I appreciate the data-driven approach. But since the seven-years-in-the-making debt collection rule is now under scrutiny, it’s worth taking a look at the numbers. What they show me is the clear need to focus on three areas.

The major headline is that complaints are up 60% from 2019 to 2020. What’s really driving that increase? It’s not necessarily what you’d expect based on what’s reported.

The top two categories in both years are Credit Reporting and Debt Collection. Credit Reporting, however, received 5x the number of complaints than debt collection in 2020, and 3x as many in 2019.

The Largest Increase in Complaints Overall Driven by Identity Theft

Digging in, the lion’s share of credit reporting complaints seems to be driven by identity theft. By far, the largest sub-category complaint under credit reporting is “Incorrect info on your report”, with a 118% increase from just over 88,000 in 2019 to just under 193,000 in 2020. By far, the largest sub-category here (with an increase of 152%) is “Information belongs to someone else.” According to my contact in Consumer Response at the CFPB, this most likely is a result of identity theft (there is no box to check that says “ID theft”).

Credit Reporting Complaints in 2019 vs. 2020, with Detail for the Two Largest Sub-Categories 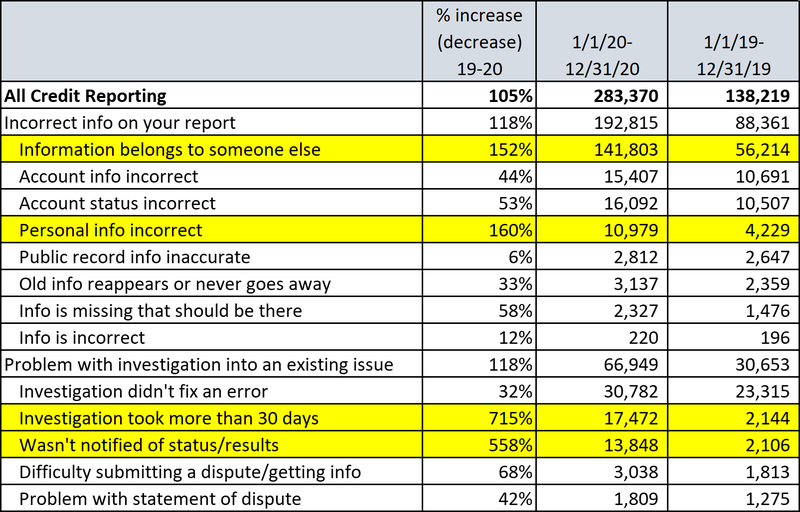 While "personal info incorrect" increased by 160%, the absolute number of complaints in this category was far less. It logically follows that the next most significant category would be investigating the instances of bad information. On a percentage basis, lengthy investigations with poor status updates saw the most significant increases by far. While not an acceptable excuse from a consumer standpoint, it's not hard to imagine how Covid workplace restrictions would cause delays in a task requiring manual investigation and coordination. It will be important to see whether these instances come down to pre-Covid levels in 2021.

Debt Collection Complaints in 2019 vs. 2020, with Detail for the Two Largest Sub-Categories 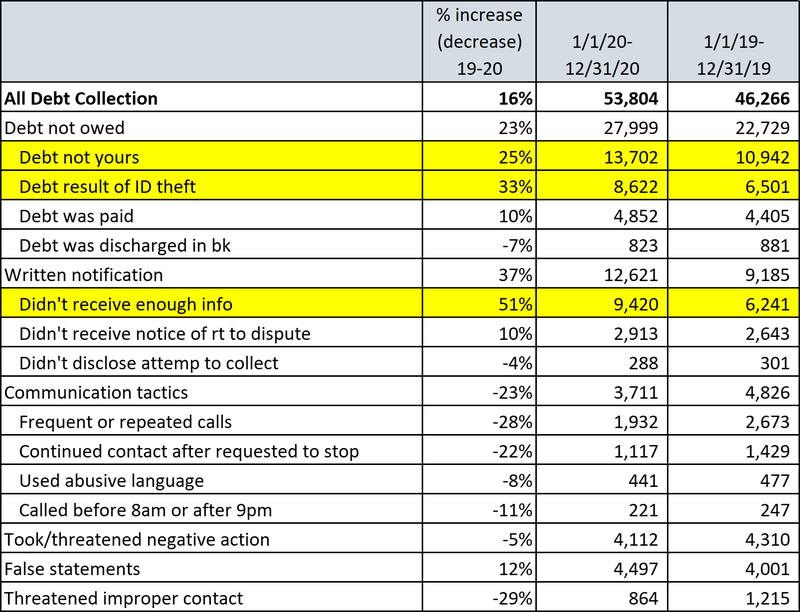 Similarly (though on a much smaller scale), one of the largest sub-categories of debt collection complaints that saw an increase in the last year is “Debt result of ID theft”, with a 33% increase.

In the “Debt not owed” category, the largest percentage increase is due to "result of ID theft." As for the other cause of significant increase, “debt not yours,” I’ll note two things:

One, while it’s possible a rogue debt collector or debt buyer will try to collect on a debt simply not owed, more often the issue is that a consumer has a dispute with the lender or creditor. So,

Two, there is no category for the consumer to select that’s something like, “I recognize this but I disagree that I owe it; It’s the wrong amount; I didn’t agree to the charge; I got terrible service; The supervisor told me I wouldn’t have to pay, etc.”

Communication Tactics are Not the Driving Problem

When consumer advocates argue that debt collection rules aren’t stringent enough, they most frequently talk about communication tactics – repeated calls, abusive language, etc. But the data shows that this is actually one of the least-cited issues by consumers...and it’s falling.

For instance, in 2020, “frequent or repeated calls” was the category selected in just over 3.5% of all debt collection complaints, and this was a 28% decrease from the prior year.

So if you were to ask me where the CFPB should place its focus under Acting Director Uejio and, once confirmed, Director Chopra, it seems obvious based on the data that the areas of greatest impact would be: