DoE says 700 collection complaints regarding federal student loans in all of 2012. Considering the volume, that’s a pretty low number.

[Note: Yesterday the CFPB published a report about the private student loan complaints received from October 2012 through March 2013. There are of course similarities to my analysis but I also noticed some material differences. I will follow up on this with another post in the coming days.]

The overwhelming majority (82.3%) of complaints was submitted via the CFPB’s online consumer response portal. This is a significant increase from the 37% of collection complaints received online in 2012 by the FTC (26.4% were received by phone, while over 19% came through the PrivacyStar mobile app).

99.4% of the posted complaints are regarding private (non-federal) loans.

Which begs the question: “Where are the complaints about federal loans?” I looked into it. It seems those complaints are forwarded to the Department of Education. I asked whether the details of those complaints would be made public on a real-time basis, like they are now with the CFPB. The answer is no.

I did learn, however, that the Federal Student Aid (FSA) office of the Department of Education publishes an annual report (last issued November 2012) about its activities. Around page 80 of the 175 page report I found information about the FSA Ombudsman Group. This is where the complaints go. Interestingly, when they get to the Ombudsman, they are no longer called complaints; they are called “assistance requests.”

According to the report,

“The FSA Ombudsman Group entered its 13th year of service to federal student aid recipients in FY 2012. Established by the 1998 amendments to the HEA, the Ombudsman began operations on September 30, 1999, and assisted its 250,000th customer during FY 2012.

Information about customer inquiries is compiled into the Ombudsman Case Tracking System.

The data are analyzed, and the findings are included in internal and external reports for FSA and the industry in general, to identify systemic issues affecting Title IV programs.

Implementation of systemic solutions can at times prevent problems, an approach preferable to resolving individual complaints as received.

“The Ombudsman classifies customer contacts as one of two types: General Assist, which are typically resolved almost immediately through the provision of information or referral to the appropriate entity with the student loan community; and Research, which present a more complex problem, are assigned to a research specialist to address and may take several months to close. As the table below demonstrates, the number of Research cases received by the Ombudsman has been increasing and accounts for a greater percentage of total customer contacts.” I imagine that “research cases” = “complaints.”

The report provides this categorization of research cases: 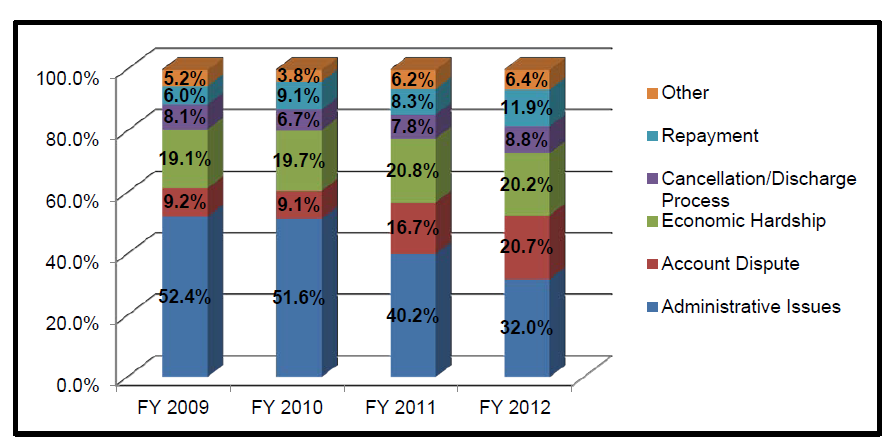 Note the significant drop in “administrative issues” from 2009 to 2012, from 52% to 32%. My read on this is not that the process has suddenly become so much easier, but that the economic downturn which began in 2008 has led to a major increase in payment problems. Also, the absolute number of research cases increased significantly.

The FSA highlights the jump in cases related to “account dispute” (i.e. borrowers challenging the balance on their student loan accounts) which began in 2011. One conclusion they make about this increase is that borrowers having trouble making payment appear to be choosing to dispute the amount owed – the way interest was calculated or the addition of collection costs and other fees – as an initial step in managing the debt.

I imagine that some percentage of those 4227 consumer inquiries (excuse me, complaints) regarding private student loans are also related to administrative, or other, issues. If we can use the “closed with explanation” category from the CFPB’s data base, that would be just under 62%.

Meanwhile, I asked a DoE spokesperson how many of the 11,570 research cases in 2012 were debt collection related. The answer: just under 2% (700 complaints).